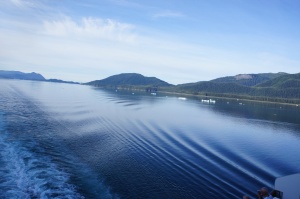 All is not as it appears.

On first impression, these glimmering waves threatened to lull me into a state of tranquility. Moments before I yielded to its temptation, I took a closer look.

Beneath the glossy surface, darkness rules. Hunters pursued the hunted. Roots struggled to remain attached. The environment shifted and swayed, constantly changing. Only the strongest survived. Not unlike that which  lurks behind my face. Thoughts come and go. Some passing almost unnoticed, while others overshadow all else.  Like a living organism they polish and tweak, constantly expanding until they dominate my mind, becoming the foundation on which a story builds.