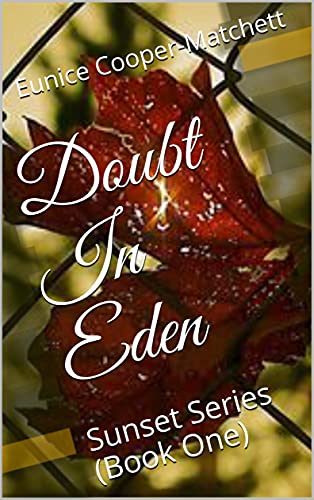 Sadness gripped Lorna Scott. She stepped onto her twelfth-floor balcony and sank into the white wrought iron lounge chair. For the last five years of their forty-year marriage, this condo had been her and Randy’s home. But not anymore. Her husband resided in heaven.

Everything looked the same, but all had changed. Yellow marigolds and snapdragons still flourished in Greek-style urns, and dark blue petunias still hung from planters anchored to the railings. A small table and chairs matching her lounge stood on the opposite side of the balcony. Her mini garden of Eden, as Randy had called it, but today the memory did little to dislodge loneliness clinging to her as a tick clings to skin.

She glanced from her spot beneath the awning to beyond the balcony railings. Rain poured down to her left, washing away dust on the streets, yet to her right, intense sunbeams warmed her bare arm. She snuggled deeper into the orange and white cushion. Only in Alberta, sun and showers hold hands.

For ten minutes, she mused on her and Randy’s last trip to Scotland with their best friends, Marcie and Jack, then pushed herself out of the chair. Even without Randy, life waited for nothing, and her shift at the local mission began in an hour.

Busyness greeted her when she arrived at the Outreach Mission. Jodi moved alongside the prep table, laying out slices of bread. She glanced up as Lorna stepped into the kitchen. “You’re just in time. Can you start buttering?”

“Will do.” Lorna washed her hands, then grabbed a clean apron from the shelf beneath the table. After she tied it around her waist, she took a knife from the drawer and started slathering buttering. The aroma of simmering beef noodle soup made her mouth water. Without breaking her rhythm, she cast Betty a smile. “Your soup smells delicious. As usual.”

Betty beamed and continued stirring the soup. “It’ll be ready soon, and I hope you’ll have those sandwiches done by then.”

Marcie rushed in and grabbed an apron. “Sorry. Didn’t mean to scare everyone. I’m running late.” She opened the fridge and took out a five-pound package of bologna, a jar of mustard, and another of mayo.

Jodi glanced at Marcie. “You haven’t been here for a while. We’ve missed you.”

Marcie’s face brightened. “Jack and I just returned from an African safari.”

Lorna’s throat throbbed. Four years ago, she and Randy were Marcia and Jack’s travel companions. She took a deep breath and released it. The pressure in her throat ebbed. She buttered the last slice of bread then squeezed squiggly lines of mustard on every second slice. When she could trust herself to speak, she glanced at Marcie. “I miss our trips.”

Jodi opened the bologna and lay a slice on top of the mustard squiggles. “It must have been strange going by yourselves instead of with Lorna and Randy.”

Marcie flipped her dark brown hair off her shoulders. “We didn’t go alone. Another couple moved into our complex six months ago. It’s amazing how much the four of us have in common. Anyway, to make a long story short, we went to Africa with them.”

Lorna’s lips quivered. She bit hard to force them still. Without Randy, she’d turned into a fifth wheel. She stepped behind Jodi and keeping her head down, folded the loaded slices of bread into sandwiches. Anything to keep busy.

“I’m sorry.” Jodi cut the sandwiches in half and placed them on a large metal tray. “That must have hurt.”

Marcie slid her arm across Lorna’s shoulders. “I’m so sorry. It wasn’t as much fun as it was with you and Randy. The four of us were a team.”

Lorna placed the last two sandwiches on the tray. “But one isn’t here anymore, and a team can’t function with a missing link. Even I understand that.” She picked up the platter and headed for the hall. “I’ll put these on the serving table. Is the egg salad finished yet?” Behind her, Marcie’s voice cracked. “I didn’t mean to upset her. It came out before I thought.”

Lorna turned. “Marcie, I understand, but it hurts.” She hurried to the auditorium. After setting the platter down, she grasped the edge of the table. Why did everyone walk on eggshells or constantly console her? It didn’t help. Letting off steam did.

The café door slammed, and Betty waddled to the table carrying the first huge soup pot.

Lorna stepped aside and pushed the mat so Betty could set the container on it.

The older lady wiped perspiration off her forehead with a corner of her apron. “It gets better. Many times, after ma George passed, ah wished ah could have gone with him, but time dulls the edges. Ah’ve developed other friendships. Not like ma George, but friends who have a cuppa when ah need one, and that’ll happen for you, too. It just takes time.” She patted Lorna’s arm and hurried back to the kitchen.

Lorna watched her go. That was so God. Only He would know what she needed to hear.  She stacked Styrofoam bowls beside the soup. “Can someone bring spoons and napkins? We have a lineup already.”

A few minutes later Lorna stood alongside Betty watching clients file past the table accepting soup and selecting sandwiches. The same hollow look resided in all their eyes. Some tried to smile and offer small talk, but others just looked down. The line thinned. Only a single layer of sandwiches remained on both platters, and Betty was leaning the soup pot to fill her ladle.

A young woman, not much more than a girl, stepped into the room and glanced around as if looking for someone. Her gaze rested on the serving table and her brow furrowed before she approached.

Betty handed her a bowl of soup. She accepted it, then took two egg salad sandwiches. “Now, that’s a sad case,” Betty whispered after the girl shuffled away. “Poor lass, she’s scared to come, but too hungry to stay away. ’Ave seen many like her.” She shook her head. “All they need is a home and someone to love them.”

Lorna nodded. “I know what you mean. The teenagers bother me. I can’t imagine what put them out on the street. They’re barely beyond childhood.”

The girl sat at an empty table and scooped a spoonful of soup into her mouth.

The furrows on Betty’s forehead arched almost to her curly, gray hairline.  “Yes and no. Don’t know her personally. She’s never been before. At least not on ma shift, but she’s just like the others. Lost and unloved.”

Lorna pretended to look at something on the wall above where the girl sat and studied her. Long black hair. Straggly, and in need of washing. High cheekbones, but delicate. Beautiful, large brown eyes. The girl looked in Lorna’s direction and her face reddened. She drank her remaining soup, grabbed her sandwiches, and ran for the door.

Betty shot Lorna a disgruntled look. “You know better than stare at clients. It embarrasses them. Makes them feel lower than they already do.”

Lorna’s cheeks burned. She did know better. Yet, there was something about the girl that grabbed her attention. She stacked the remaining sandwiches on a smaller tray and returned the larger ones to the kitchen.

Lorna leaned back in her recliner, unable to erase the young lady’s face from her mind. She ran her fingers through her hair, forcing the short spikes to stand taller, but restlessness remained. She needed to run. It put her thoughts in order and dispersed confusion.

Clad in a black jersey exercise suit, she hit the trail that wandered around the pond in the center of her complex then made its way into the river valley. By the time she’d passed the manicured lawns, and entered the untamed forests hugging the North Saskatchewan River, the day’s pressures lessened.  She breathed in the earthy aroma of spruce and rotting vegetation. As the trail narrowed, twigs and needles snagged her hair, giving her a mini head massage as she ploughed forward.

The evergreens gave way to poplar and shrubs, enabling Lorna to pick up more speed. Her breath strained, and her parched throat hurt, but she pushed on. She reached a bench sitting alongside the narrow dirt trail and collapsed onto it. Leaning her head back, she sucked in deep breaths. Once her heart rate and breathing normalized, she took several long pulls from the water bottle she’d attached to her belt. Relief was instant.

She glanced at her watch. Nine fifteen. As if to confirm the time, a chilly breeze rustled leaves on the giant trees. Lorna shivered, then hurried down the trail. When she rounded the corner that started her homeward jaunt, the trail was vacant. She quickened her gait. How could she have lost track of time? Since Randy’s death, awareness of her surroundings were a part of life.

An hour later, she emerged from the bathroom snuggled in her favorite robe with a towel wrapped around her wet hair. Her computer pinged, announcing a new email, and she crossed the hall to the den. Only four messages. The last caught her attention. Big white letters popped off a bright blue background. ARE YOU TIRED OF BEING ALONE? WE UNDERSTAND.

“I’m sure you do.” Lorna moved her cursor to the delete icon. But before she clicked, the website name stopped her. THE CHIRSTIAN MEETING SPOT. She scrolled through the site, and her throat stiffened. It said Christian, so it shouldn’t hurt to browse. Before she could talk herself out of it, she clicked on the Learn More icon.

A registration appeared. Lorna leaned back in the chair. Horror stories of online dating sites were old news. Exploitation ruled these communities.  But this one didn’t say dating, it said meeting. And a friend was what she needed right now. She tapped the left side of her mouse. Rationality screamed Get out! Christian made her hesitate. Loneliness reached for the mouse.

When she finished the registration, she clicked Join. Excitement swept through her, then what have I done? wiped it away. But she’d done nothing except tire of being alone.

Just a Thought or Two

This WordPress.com site is about gardening, I Love a Garden!

Thought Catalog is a digital youth culture magazine dedicated to your stories and ideas.

A Little Blog of Books

Book reviews and other literary-related musings

A community of agented authors encouraging, engaging, and enriching others throughout their writing journey.

A Writer. A Woman. And a little weird.

Walking through life together

All is not quiet in the countryside

The latest news on WordPress.com and the WordPress community.